We who are gathered to commemorate a quarter of a century of our club’s history can never be expected to grasp the total effect of the work of hundreds of members who have contributed to the success of its original purpose, the conservation of our wildlife resources. There are few members of the club today who took part in that first meeting at Lovell’s Corner in 1929; there are a great many more who played an active part in starting and carrying on this work to which we are dedicated today. To them all we pay our sincere respects and offer this humble thanksgiving.

The club was founded in 1929 on the cornerstone of wildlife conservation. Its original members were all outdoorsmen interested in protecting the sport and the life which they loved. Committees were formed and offices created; the Weymouth Sportsmen’s Club came into being.

Money was raised by the club by means of sponsoring field trials and hare stakes, fishing contests, sports field days, raffles and financial drives of every description. Pheasants were originally purchased and released into new cover; trout were purchased every spring in increasing numbers and released into waters of Swamp and Weir Rivers, Whitman’s Pond, the Plymouth River and Cushing Pond. The residential growth of Weymouth and the surrounding community was met by the club with a corresponding increase in club membership and an accelerated drive to preserve the natural beauty and the resources of its diminishing wildlife habitat.

After twenty-three years of renting halls and meeting “without a home”, as the veteran member John Cullivan phrased it, the membership decided to build a clubhouse and work began in 1952 on the club grounds off Front Street. The clubhouse, now completed, can serve as a model headquarters for sportsmen. It incorporates a meeting hall, an indoor rifle and pistol range, a game room, a cloak room and executive office. In the rear of the clubhouse the archery committee has constructed a roving range for enthusiasts of the bow.

The land on which the club was built was donated by Helene and Lawrence G. Lambros, wife and son in honor of George Lambros an active sportsman who died in 1943. The family lived in the historic Reed House which was built in 1760 at 683 Front Street.

We of the Weymouth Sportsmen’s Club can take rightful pride in our organization and the men associated with it and this pause to briefly review its background and growth may serve to further inspire us to continue this work in the same tradition of conservation and the protection of our wildlife heritage. This pause is a momentary glance backward over the past twenty-five years; may it serve to inspire us to keep this tradition alive.

Return to About Us

The Weymouth Sportsmen’s Club, established in 1929, is a non-profit organization promoting legitimate sport with handguns, 22 rifles, bows, and other field sports, and supports propagation and conservation of fish and wildlife. 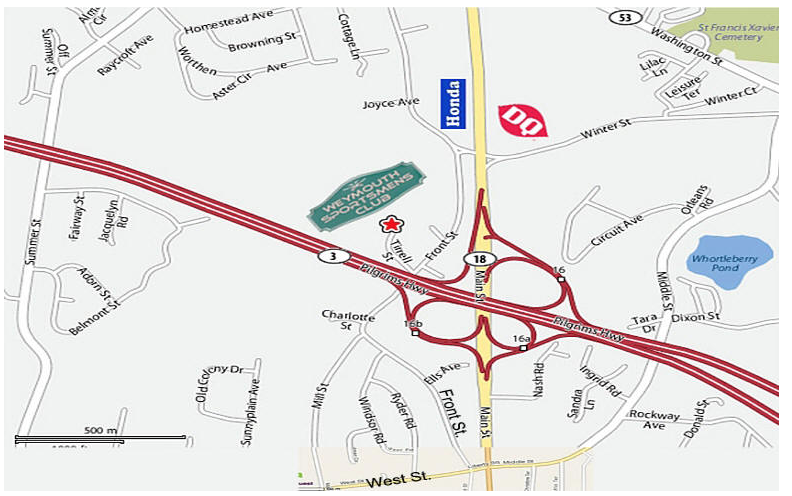